The concerto has a duration of roughly 33 minutes and is composed in three movements:

The Violin Concerto has been praised by music critics. Reviewing the New York City premiere, Allan Kozinn of The New York Times wrote, "Its big, exploratory opening movement is packed with quick, insistent solo lines and dialogues between the violin and either the full orchestra or individual sections or players; its lush, slow movement (here in the form of a chaconne) exploits the violin's lyrical qualities, and its finale is driven by daredevil speediness."[5] Duncan Druce of Gramophone similarly described the piece as "an attractive, colourful work, scored most imaginatively and with great finesse." He continued, "I enjoyed the first movement especially, its disparate material so expertly contrasted and integrated. The second movement, entitled 'Chaconni', has a pastoral feel, vaguely reminiscent of Vaughan Williams but with the lark ascending into a more unsettled sky. The finale, a real showpiece for the violin, is less substantial but rhythmically most inventive."[6]

The Symphony No. 5 in D minor, Op. 47, by Dmitri Shostakovich is a work for orchestra composed between April and July 1937. Its first performance was on November 21, 1937, in Leningrad by the Leningrad Philharmonic Orchestra under Yevgeny Mravinsky. The premiere was a huge success and received an ovation that lasted well over half an hour.[1]

The symphony is approximately 45 minutes in length and has four movements:

The Symphony quotes Shostakovich's song Vozrozhdenije (Op. 46 No. 1, composed in 1936–37), most notably in the last movement; the song is a setting of a poem by Alexander Pushkin (find text and a translation here) that deals with the matter of rebirth. This song is by some considered to be a vital clue to the interpretation and understanding of the whole symphony.[3] In addition, commentators have noted that Shostakovich incorporated a motif from the "Habanera" from Bizet's Carmen into the first movement, a reference to Shostakovich's earlier infatuation with Elena Konstantinovksya, who refused his offer of marriage; she subsequently moved to Spain and married a man named Roman Carmen.[4][5]

With the Fifth Symphony, Shostakovich gained an unprecedented triumph, with the music appealing equally—and remarkably—to both the public and official critics, though the overwhelming public response to the work initially aroused suspicions among certain officials. The then-head of the Leningrad Philharmonic, Mikhail Chulaki, recalls that certain authorities bristled at Mravinsky's gesture of lifting the score above his head to the cheering audience, and a subsequent performance was attended by two plainly hostile officials, V.N. Surin and Boris M. Yarustovsky, who tried to claim in the face of the vociferous ovation given the symphony that the audience was made up of "hand-picked" Shostakovich supporters.[6] Yet the authorities in due course claimed that they found everything they had demanded of Shostakovich restored in the symphony. Meanwhile, the public heard it as an expression of the suffering to which it had been subjected by Stalin. The same work was essentially received two different ways.[7] 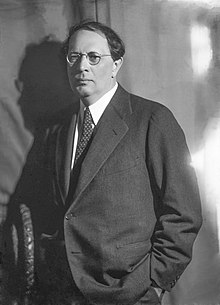 An article reportedly written by the composer appeared in the Moscow newspaper Vechernyaya Moskva on January 25, 1938, a few days before the Moscow premiere of the Fifth Symphony.[8] There, he reportedly states that the work "is a Soviet artist's creative response to justified criticism". Whether Shostakovich or someone more closely connected with the Party actually wrote the article is open to question,[9] but the phrase "justified criticism"—a reference to the denunciation of the composer in 1936—is especially telling.[10] Official critics treated the work as a turnaround in its composer's career, a personal perestroyka or "restructuring" by the composer, with the Party engineering Shostakovich's rehabilitation as carefully as it had his fall a couple of years earlier.[9] Like the Pravda attack at that time on the opera Lady Macbeth of the Mtsensk District, the political basis for extolling the Fifth Symphony was to show how the Party could make artists bow to its demands.[9]

The official tone toward the Fifth Symphony was further set by a review by Alexei Tolstoy, who likened the symphony to the literary model of the Soviet Bildungsroman describing "the formation of a personality"—in other words, of a Soviet personality.[7] In the first movement, the composer-hero suffers a psychological crisis giving rise to a burst of energy. The second movement provides respite. In the third movement, the personality begins to form: "Here the personality submerges itself in the great epoch that surrounds it, and begins to resonate with the epoch."[11] With the finale, Tolstoy wrote, came victory, "an enormous optimistic lift".[11] As for the ecstatic reaction of the audience to the work, Tolstoy claimed it showed Shostakovich's perestroyka to be sincere. "Our audience is organically incapable of accepting decadent, gloomy, pessimistic art. Our audience responds enthusiastically to all that is bright, clear, joyous, optimistic, life-affirming."[11]

Not everyone agreed with Tolstoy, even after another article reportedly by the composer echoed Tolstoy's views. Asafiev, for one, wrote, "This unsettled, sensitive, evocative music which inspires such gigantic conflict comes across as a true account of the problems facing modern man—not one individual or several, but mankind."[12] The composer himself seemed to second this view long after the fact, in a conversation with author Chinghiz Aitmatov in the late 1960s. "There are far more openings for new Shakespeares in today's world," he said, "for never before in its development has mankind achieved such unanimity of spirit: so when another such artist appears, he will be able to express the whole world in himself, like a musician."[12]

During the first performance of the symphony, people were reported to have wept during the Largo movement.[13] The music, steeped in an atmosphere of mourning, contained echoes of the panikhida, the Russian Orthodox requiem. It also recalled a genre of Russian symphonic works written in memory of the dead, including pieces by Glazunov, Steinberg, Rimsky-Korsakov and Stravinsky.

After the symphony had been performed in Moscow, Heinrich Neuhaus called the work "deep, meaningful, gripping music, classical in the integrity of its conception, perfect in form and the mastery of orchestral writing—music striking for its novelty and originality, but at the same time somehow hauntingly familiar, so truly and sincerely does it recount human feelings".[14]

Shostakovich returned to the traditional four-movement form and a normal-sized orchestra. More tellingly, he organized each movement along clear lines, having concluded that a symphony cannot be a viable work without firm architecture. The harmonic idiom in the Fifth is less astringent, more tonal than previously, and the thematic material is more accessible. It has been said that, in the Fifth Symphony, the best qualities of Shostakovich's music, such as meditation, humor and grandeur, blend in perfect balance and self-fulfillment.[15]

The final movement is declared in Testimony to be a parody of shrillness, representing "forced rejoicing". In the words attributed to the composer in Testimony (a work which, although attributed to Shostakovich himself, is shown to have serious flaws in its credibility[16][17]):

While most performances and recordings of the symphony have ended with a gradual acceleration of the coda, especially Leonard Bernstein's October 1959 Columbia Records recording with the New York Philharmonic (following a performance in Moscow in the presence of the composer), more recent renditions have reflected a different interpretation (though not clearly provable) of Shostakovich's intention.[citation needed] Shostakovich's friend and colleague Mstislav Rostropovich conducted the closing minutes in a much slower, subdued manner, never accelerating; he did this in a performance in Russia with the National Symphony Orchestra and in their commercial Teldec recording. He told CBS that Shostakovich had written a "hidden message" in the symphony, which is allegedly supported by the composer's words in Testimony.[citation needed]

Nowadays, it is one of his most popular symphonies.[19]

Notable recordings of this symphony include:[20]