Paquito D'Rivera (born 4 June 1948) is a Cuban-American clarinetist, saxophonist and composer who plays and composes jazz and classical music.

Paquito Francisco D'Rivera was born in Havana, Cuba. His father played classical saxophone, entertained his son with Duke Ellington and Benny Goodman records, and he sold musical instruments. He took D'Rivera to clubs like the Tropicana (frequented by his musician friends and customers) and to concert bands and orchestras.[1]

At age five, D'Rivera began saxophone lessons by his father. In 1960 he attended the Havana Conservatory of Music, where he learned saxophone and clarinet and met Chucho Valdés.[2] In 1965, he was a featured soloist with the Cuban National Symphony Orchestra. He and Valdés founded Orchestra Cubana de Musica Moderna and then in 1973 the group Irakere, which fused jazz, rock, classical, and Cuban music.[3]

By 1980, D'Rivera had become dissatisfied with the constraints placed on his music in Cuba for many years. In an interview with ReasonTV, D'Rivera recalled that the Cuban communist government described jazz and rock and roll as "imperialist" music that was officially discouraged in the 1960s/70s, and that a meeting with Che Guevara sparked his desire to leave Cuba.[4] In early 1980, while on tour in Spain, he sought asylum with the American Embassy, leaving his wife and child behind, with a promise to bring them out of Cuba.

Upon his arrival in the United States, D'Rivera found great support for him and his family. His mother, Maura, and his sister, Rosario, had left Cuba in 1968 and became US citizens. Maura had worked in the US in the fashion industry for many years, and Rosario had become a respected artist/entrepreneur. He was introduced to the jazz scene at some prestigious clubs and concert halls in New York. He became something of a phenomenon after the release of his first two solo albums, Paquito Blowin' (June 1981) and Mariel (July 1982).[5]

In 2005, D'Rivera wrote a letter criticizing musician Carlos Santana for his decision to wear a T-shirt with the image of Che Guevara on it to the 2005 Academy Awards, citing Guevara's role in the execution of counter-revolutionaries in Cuba, including his own cousin.[6]

Throughout his career in the United States, D'Rivera's albums have received reviews from critics and have hit the top of the jazz charts. His albums have shown a progression that demonstrates his extraordinary abilities in bebop, classical and Latin/Caribbean music. D'Rivera's expertise transcends musical genres as he is the only artist to ever have won Grammy Awards in both Classical and Latin Jazz categories.[9]

D'Rivera was a judge for the 5th and 8th annual Independent Music Awards to support independent artists.[10]

The band backing D'Rivera consists of Peruvian bassist Oscar Stagnaro, Argentinean trumpeter Diego Urcola, American drummer Mark Walker, and pianist Alex Brown.[11] As a whole they are named the "Paquito D'Rivera Quintet"[11] and under this name they were awarded the Latin Grammy Award for Best Latin Jazz Album for the album Live at the Blue Note in 2001.[12] 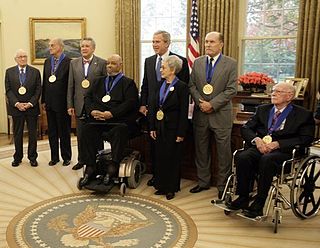 U.S. President George W. Bush stands with recipients of the 2005 National Medal of Arts on 9 November 2005, in the Oval Office.

BachPreludio from Partita No. 3 in E Major

The Partita No. 3 in E major for solo violin, BWV 1006.1 (formerly 1006),[1] is the last work in Johann Sebastian Bach's set of Six Sonatas and Partitas. It consists of the following movements:

It takes about 20 minutes to perform.

Bach transcribed the Partita as a Suite, cataloged as BWV 1006.2 (formerly 1006a).[2] The music critic Wilhelm Tappert claimed in 1900 that this arrangement was for lute solo, but present research[by whom?] indicates that it was for an unspecified instrument.[3][neutrality is disputed]

The most commonly found recordings are usually of the Preludio.[citation needed] The Preludio consists almost entirely of semiquavers (i.e. sixteenth notes). The Preludio was also transcribed by Bach for use in two cantatas:

The "Gavotte en Rondeau" is famously included on the Voyager Golden Record and often heard in TV or radio programs.[citation needed]

In 1933 Sergei Rachmaninoff transcribed for piano (and subsequently recorded) the Preludio, Gavotte, and Giga from this partita (as TN 111/1).[citation needed]

The Sonata for Solo Violin Sz. 117, BB 124, is a sonata for unaccompanied violin composed by Béla Bartók. It was premiered by Yehudi Menuhin, to whom it was dedicated, in New York on 26 November 1944.

Violinist Yehudi Menuhin commissioned a work for solo violin from Bartók in November 1943. It was written in New York and in Asheville, North Carolina, where Bartók underwent treatment for leukemia. Bartók finished composing the piece in March 1944. He wrote letters to Menuhin in April and June 1944 to agree on minor changes to make the Sonata easier to play.

The Sonata consists of four movements:

The Tempo di ciaccona is essentially a sonata-form movement[a] written somewhat in the style of a chaconne, even though it is not its form. It is full of typical Hungarian folk intervals and harmonies. The Fuga begins with a four-voice fugue on a pulsating, staccato melody. After a section where the melody is accompanied quietly with fast running notes, it returns as a series of chords, alternately played with the bow and plucked in inversion. Nevertheless, it is not a strict fugue, as every episode introduces new material to the subject. The Melodia begins with a lyrical melody, stated alone and in all different registers of the instrument. It continues in sixths, octaves, and tenths, accompanied by trills and tremolos. The Presto alternates between a very quiet, fast, bumblebee-like passage played with a mute, and a cheerful melody. Bartók originally wrote the rapid passages in quarter-tones, but many violinists choose to perform a version, suggested by Menuhin, that only uses the standard 12 notes of Western classical music. Three contrasting themes appear throughout this movement, all of which re-appear in the final coda.

The Solo Sonata presents violinists with many difficulties and uses the full gamut of violin techniques: several notes played simultaneously (multiple stops), artificial harmonics, left-hand pizzicato executed simultaneously with a melody played with the bow, and wide leaps between pitches.

Born in Paris, Claude Arrieu was a classically trained musician from an early age. She became particularly interested in works by Bach and Mozart, and later, Igor Stravinsky. However, Gabriel Fauré, Claude Debussy, and Maurice Ravel provided her the most inspiration.

Dreaming of a career as a virtuoso, she entered the Conservatoire de Paris in 1924. She became a piano student of Marguerite Long and took classes from Georges Caussade, Noël Gallon, Jean Roger-Ducasse and Paul Dukas. In 1932, she received first prize for composition.

From this point on, she developed her personal style. She was particularly interested in the evolution of musical language and various technical means available. In 1935, she joined the French Radio Broadcasting Program Service (« Service des programmes de la Radiodiffusion française »), where she was employed to 1947. She participated in the development of a wide range of programming, including Pierre Schaeffer's experimental radio series, La Coquille à planètes (1943–1944). In 1949, she won the Prix Italia of the RAI for her score Frédéric Général.

She wrote music in all styles, composing works of "pure music" as well as music for theatre, film, radio, and music hall, contributing her own voice to every situation, dramatic or comic, with a particular taste for rhythm and imagery. Her musical gift is typified by its ease of flow and elegance of structure. Vivacity, clarity of expression, and a natural feel for melody are her hallmarks.

Among her important chamber music compositions are her Trio for Woodwinds (1936), Sonatina for two violins (1937), and Clarinet Quartet (1964). Her Sonatine for flute and piano made a big impression at its first radio performance in 1944 by Jean-Pierre Rampal and H. Moyens.

Although Arrieu's instrumental works strongly contributed to her legacy, it is vocal music that most markedly distinguish her career. Voice inspired her to set many poems to music, including those by Joachim du Bellay, Louise Levêque de Vilmorin, Louis Aragon, Jean Cocteau, Jean Tardieu, Stéphane Mallarmé, and Paul Éluard. Examples include Chansons bas for voice and piano based on poems by Mallarmé (1937); Candide, radio music on texts by Jean Tardieu based on Voltaire; and À la Libération, cantata of seven poems on love in war, on poems by Paul Éluard.

Her first opéra bouffe, Cadet Roussel with a libretto by André de la Tourasse after Jean Limozin, was presented at the Opéra de Marseille on 2 October 1953. In 1960, La Princesse de Babylone, an opéra bouffe after the work of Voltaire adapted by Pierre Dominica, was praised for its lyrical originality and spectacle.

Pierre Schaeffer wrote: "Claude Arrieu is part of her time by virtue of a presence, an instinct of efficiency, a bold fidelity. Whatever the means, concertos or songs, music for official events, concerts for the elite or for a crowd of spectators, she delivered emotion through an impeccable technique and a spiritual vigilance, finding the path to the heart."

Selected works for stage and broadcast

Arrieu was 33 when she wrote the Reed Trio; it was commissioned by the Trio D’Anches de Paris; Poulenc (1926), Milhaud (Suite d’après Michel Corrette, op 161, 1937) Ibert (1935), and Auric (1938) had also composed for them. However, her Trio shows the care she took with the part writing, sharing the material equally between the three instruments. The opening Allegretto ritmico is a swaggering mock march, with contrasting, nostalgic episodes. Initially the Pastorale et Scherzo is tender and swaying; the 3-time continues, faster and cheekily, and includes its own ‘middle section’. The Final, Allègrement, emulates the military manner, even in 3-time; then comes a ‘proper’, 4-time, steadier parade. Her wittiness is mischievous, producing teasingly foiled expectations in a mildly anarchic manner.

The humorous first movement has slightly grotesque leaps in the main theme. An intermezzo quality characterises the outer sections of the second movement, around a brief scherzando. Next, a pastoral 6/8 precedes a bustling second scherzando. The singing wind writing is taken up again in the Cantabile, and the whole is rounded off with an energetic finale, which ends in a characteristically French gesture - with surprising gentleness.