Marianna Martines, also Marianne von Martinez[2] (4 May 1744 – 13 December 1812), was a singer, pianist and composer of the classical period, based in Vienna.

Marianna Martines's paternal grandfather was a Spanish soldier who had settled in Naples. Her father, Nicolo Martines, grew up there and for a time pursued a career as a soldier. He later changed careers, serving in Vienna as Maestro di Camera (major-domo) at the papal nuncio; that is, the Pope's embassy to the Austrian Empire. For service to the Empire, Marianna's brothers in 1774 acquired a patent of nobility, hence the "von" in the family surname.[3]

In his youth in Italy, Nicolo had befriended the poet Pietro Trapassi, who wrote under the name Metastasio. The latter had risen in eminence, to the point that in 1730 he was called to Vienna to serve as the Poet Laureate of the Empire. Metastasio resided with the Martines family for the entire rest of his life (from about 1734 to 1782). His presence would prove crucial to Marianne's career.

The Martines family lived in rooms in a large building on the  [de] in Vienna, "a stately building still standing in the Kohlmarkt".[4] As was common in the days before elevators, the floors of the building corresponded to the social class of the inhabitants. On the lowest floor were the rooms of the dowager princess of the wealthy Esterházy family. The Martines family were on the third floor. Another resident of the middle floors was Nicola Porpora, a well-known Italian singing teacher and composer.[4] At the very top, in a cold and leaky attic room, lived a struggling young composer, Joseph Haydn, who was trying to make his way as a freelance musician. The lives of all of these people ultimately came to be connected, in part through Marianna Martines.[5]

She was born into this home in 1744. Though baptized Anna Catherina,[6] she chose to go by the name Marianna.

Metastasio, the family friend, made it a practice to help out with the raising and careers of the Martines children; for instance, at one point he helped Giuseppe obtain an important job as custodian of the Imperial Library. In the case of Marianna, he noticed her precocious talents early, and thus came to oversee her education, musical and otherwise.

He first arranged for her to take keyboard lessons from Haydn, whom Metastasio had met as a result of their living in the same building. Then, at age ten, Marianna began singing lessons with Porpora, who had also met Haydn and taken him on as his assistant; Haydn played the harpsichord while Porpora taught Marianne.

Soon after Marianna began her music lessons she demonstrated a talent for composition, so she began still further lessons with Johann Adolph Hasse and the Imperial court composer Giuseppe Bonno.

Metastasio also saw to it that Marianna received a thorough general education, which far surpassed what was considered standard for women of her social class at that time. She was a native speaker of both Italian and German, and in an autobiographical letter to Padre Martini indicated that she had good command of French. The musicologist Charles Burney, visiting Vienna, found that she also could speak English.[7]

Career as performer and composer

A number of the works that Martines composed are set for solo voice, and her biographers (Godt, Wessely) conjecture that the first singer of these works was their composer. If so, they constitute further evidence for her ability, as the music shows a "predilection for coloratura passages, leaps over wide intervals and trills indicat[ing] that she herself must have been an excellent singer." (Wessely).

Martines wrote a number of secular cantatas and two oratorios to Italian texts. These texts are, naturally enough, the work of her mentor Metastasio.

Surviving compositions include four masses, six motets, and three litanies for choir. She wrote in the Italian style, as was typical for the early Classical period in Vienna. Her harpsichord performance practice was compared to the style of C.P.E. Bach. Martines's compositions were well regarded in her time, and some scholars have suggested that Mozart modeled his 1768 Mass, K. 139, after the "Christe" of Martines's Mass No. 1 in D major. The Michaelerkirche (St. Michael's Church, next door to the Martines home), saw a performance of her third mass in 1761. Her fourth mass was completed in 1765.

Martines's name and music were known throughout Europe, and she was admitted to the Accademia Filarmonica of Bologna in 1773.

Her Italian oratorio Isacco figura del redentore was premiered by massive forces in concerts (17 and 19 March 1782) of the Tonkünstler-Societät, a long-standing series that also performed large-scale works by Haydn, Mozart, Beethoven, and Handel. The vocal soloists included Caterina Cavalieri, and Ludwig Fischer.[10]

Martines and her sister, neither of whom ever married, looked after their family friend Metastasio until his death in 1782. Upon his passing, Metastasio left his estate to the Martines family; Marianna received 20,000 florins, Metastasio's harpsichord, and his music library. Marianna and her sister hosted musical soirees at their home. These weekly musical events attracted many distinguished guests, including Haydn and Irish tenor Michael Kelly. Mozart also was a frequent guest to the soirees and composed four-hand piano sonatas to perform with Marianne.

Though she was an active and highly accomplished performer and composer she never sought an appointed position; it would have been unacceptable for a woman in her social class to seek such employment.

Her last known public appearance was on 23 March 1808, attending a performance of Haydn's oratorio Die Schöpfung conducted by Salieri, in tribute to the composer. She died on 13 December 1812 and was buried in St. Mark's Cemetery.

Several of her pieces have been published in recent years. The three keyboard sonatas (in E Major, G Major and A Major) are available through Hildegard Publishing. Many works are also available through Furore-Verlag, a German publisher that specializes in works by women composers. They offer many first publications, including: the Keyboard Concerto in A; Dixit Dominus for Soli, Choir and Orchestra; In Exitu Israel de Agypto, Psalm for Soli, Choir and Orchestra; Laudate Pueri Dominum, Psalm 112, for SATB choir and orchestra; the Fourth Mass.

The Symphony No. 82 in C major, Hoboken 1/82, is the first of the six Paris Symphonies (numbers 82-87) written by Joseph Haydn. It is popularly known as the Bear Symphony. 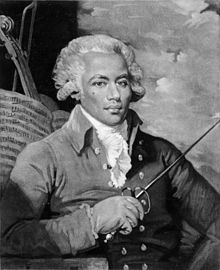 The Chevalier de Saint-Georges, who conducted the premiere of the Symphony.

The symphony was one of a series of six symphonies commissioned in 1786 by the Concert de la Loge Olympique, a popular concert subscription in Paris (hence the name for the series as a whole). Like the other Paris symphonies, "the Bear" was written for the largest orchestral ensemble that Haydn had written for up until that time, including reinforced woodwind parts and a large string section.[1] Despite its number, the symphony was actually the last of the six Paris symphonies to be composed. It was completed in 1786.

It was first performed in 1787 in Paris by the Concert de la Loge Olympique, directed by the celebrated mulatto musician, Joseph Bologne, Chevalier de Saint-Georges.

The work is in standard four movement form and scored for flute, two oboes, two bassoons, horns and/or trumpets, timpani, continuo (harpsichord) and strings. Early conflicting manuscript sources make the exact scoring for the brass unclear. Typically, however it is performed with both horns and trumpets.[2]

The symphony has long been popularly referred to as "the Bear". As with the nicknames of all Haydn's symphonies, it did not originate with the composer. Instead, the name derives from a recurring feature from the last movement (including its famous opening), in which Haydn intimates the tonality of a bagpipes or Dudelsack: a low sustained drone, accentuated by a grace-note on the downbeat. This curious tonality prompted an 1829 piano arrangement of the symphony to be entitled "Danse de l'Ours," the earliest known printed appearance of the nickname.[3] This is a reference to the music used to accompany dancing bears — a popular form of street entertainment.[4]

The Piano Concerto No. 5 in E♭ major, Op. 73, by Ludwig van Beethoven, popularly known as the Emperor Concerto, was his last completed piano concerto. It was written between 1809 and 1811 in Vienna, and was dedicated to Archduke Rudolf, Beethoven's patron and pupil. The first performance took place on 13 January 1811 at the Palace of Prince Joseph Lobkowitz in Vienna, with Archduke Rudolf as the soloist,[1] followed by a public concert on 28 November 1811 at the Gewandhaus in Leipzig under conductor Johann Philipp Christian Schulz, the soloist being Friedrich Schneider.[2][3] On 12 February 1812, Carl Czerny, another student of Beethoven's, gave the Vienna debut of this work.

The epithet of Emperor for this concerto was not Beethoven's own but was coined by Johann Baptist Cramer, the English publisher of the concerto.[4] Its duration is approximately forty minutes.

The concerto is scored for solo piano, two flutes, two oboes, two clarinets in B♭ (clarinet I playing in A in movement 2), two bassoons, two horns, two trumpets, timpani in E♭ and B♭, and strings. In the second movement, 2nd flute, 2nd clarinet, trumpets, and timpani are tacet.

The concerto is divided into three movements:

The first movement begins with the solo piano unfurling a series of virtuosic pronouncements punctuated by emphatic loud chords from the full orchestra. The vigorous, incessantly propulsive main theme follows, undergoing complex thematic transformation, with a secondary theme of tonic and dominant notes and chords. When the piano enters with the first theme, the expository material is repeated with variations, virtuoso figurations, and modified harmonies. The second theme enters in the unusual key of B minor before moving to B major and at last to the expected key of B♭ major several bars later.

Following the opening flourish, the movement follows Beethoven's three-theme sonata structure for a concerto. The orchestral exposition is a two-theme sonata exposition, but the second exposition with the piano introduces a triumphant, virtuosic third theme that belongs solely to the solo instrument, a trademark of Beethoven's concertos. The coda elaborates upon the open-ended first theme, building in intensity before finishing in a final climactic arrival at the tonic E♭ major.

The second movement in B major forms a quiet nocturne for the solo piano, muted strings, and wind instruments that converse with the solo piano. The movement briefly changes to D major, a very remote key from the concerto's E♭ major. The third movement begins without interruption when a lone bassoon note B drops a semitone to B♭, the dominant of the tonic key E♭. The end of the second movement was written to build directly into the third.

The final movement of the concerto is a seven-part rondo form (ABACABA). The solo piano introduces the main theme before the full orchestra affirms the soloist's statement. The rondo's B-section begins with piano scales, before the orchestra again responds. The C-section is much longer, presenting the theme from the A-section in three different keys before the piano performs a passage of arpeggios. Rather than finishing with a strong entrance from the orchestra, however, the trill ending the cadenza dies away until the introductory theme reappears, played first by the piano and then the orchestra. In the last section, the theme undergoes variation before the concerto ends with a short cadenza and robust orchestral response.